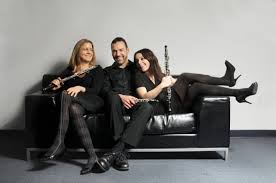 One of New York’s Most Unique Ensembles…Threeds

THREEDS is a New York City based oboe trio that includes Kathy Halvorson, Katie Scheele and Mark Snyder. The three musicians (usually two oboes and an English horn) have performed in some of New York’s most prestigious chamber music venues including Trinity Church @ Wall Street’s “Concerts at One” series; “Music for Summer Evenings” at the Grace Chapel in Silver Bay (Lake George), NY; and at the Good Shepherd Church in Brooklyn, NY. The trio enjoys exploring a wide variety of music from all musical time periods and from all corners of the world. The members of THREEDS have also arranged music to accompany several local singer-songwriters (including Amber Rubarth, Adam Levy and Alex Berger) and have been featured at several downtown NYC music venues including Joe’s Pub, the Living Room, the Rockwood Music Hall and Pete’s Candy Store.

Threeds are the NYC’s MTA’s newest Music Under New York artists, which means you may be hearing them in the subway sometime soon!

Threeds has just released their debut CD, “Unraveled”. You can purchase it on iTunes, CDbaby, and CDuniverse!!

Individually, each of the oboists in THREEDS are accomplished freelance musicians and have played in many prestigious orchestras including the Rotterdam Philharmonic, the Richmond Symphony, Cork Opera, the Key West Symphony, the Albany Symphony, the Moscow Chamber Orchestra, the Reading (PA) Symphony, the Westchester Philharmonic and the Long Island Philharmonic. Members of THREEDS have also performed on Broadway shows, played on several popular music albums and on Emmy nominated independent film soundtracks.