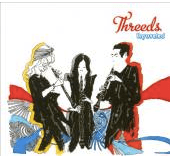 Latest review of our CD, “Unraveled”….

The Threeds’ Oboes Make You Laugh and Give You Chills Too

The idea of a band with three oboes and not much of anything else is pretty awesome in itself. Add an irrepressible sense of humor, a penchant for rearranging familiar tunes in unfamiliar ways, and three players with chops as soulful as they are technically impressive, and you get the Threeds oboe trio. Their new album Unraveling is pure joy – except when it’s bittersweet, or sad, or even haunting, as it is much of the time. Much as Kathy Halvorson, Mark Snyder and Katie Scheele have a great time rearranging Michael Jackson, Stevie Wonder, Bjork and others, this is as about as far from a joke record as you can get. Can you say cutting-edge with a smirk?

On the opening track, Joga, they find Bjork’s plaintive inner baroque soul. Their cover of Billie Jean has a bass clarinet playing the bassline perfectly deadpan and mechanical, with the trio in perfect alignment. In the beginning, the arrangement really nails the cold, heartless precision of the original; as it goes on, it’s impossible to escape the context, and becomes just plain hilarious, especially when two of the oboes do those staccato backing vocal lines. Best yet, you can download it for free. While the version of Stevie Wonder’s Superstition also has the bass clarinet playing the bassline, it swings, and so do the oboes – it’s blissfully funky. In a pretty stark contrast, Paranoid Android gives Radiohead’s crazy cyborg some real humanity – when it segues into a restless march, it’s one of the most unaffectedly intense moments on the album.

Goodbye Pork Pie Hat begins as a duo, with Scott Anderson on acoustic guitar and Halvorson playing Mingus’ sad, bitter lead lines. It’s a potent reminder that Mingus wrote the song as an elegy for Lester Young, the bass clarinet’s sustained lines underscoring Halvorson’s understatedly wounded, blues-infused phrasing. Light My Fire has drums, percussion, and tambourine along with bass clarinet – it works as well as it does because Manzarek nicked a Chopin riff for it! The spiraling bop oboe at the point where the organ solo kicks in is pretty hilarious, and absolutely spot-on. The most intriguingly complex arrangement here is the series of lushly intricate, shifting segments in the suspenseful, nocturnal Spanish Stairs.

Dospatsko Horo is the Balkans done as baroque – it doesn’t quite turn the party into a wake but it’s definitely a radical reinvention. Hoagy Carmichael’s Skylark also gets a radical reinvention, in this case as riff-driven 21st century circular music.The other tracks include the classic tango El Choclo done as a brooding yet sprightly baroque round; Oblivion, a bolero-flavored pop ballad; Little Feat’s Roll Um Easy, which surprisingly hits a mellow early 70s Allman Brothers vibe, soaring oboes enhancing the blue-sky ambience. The only track here that’s not worth uploading is not the band’s fault. This works on so many levels – as party music, as a monster ipod mix and as sophisticated 21st century stuff. Look for this one on our best-of-2011 list at the end of the year.