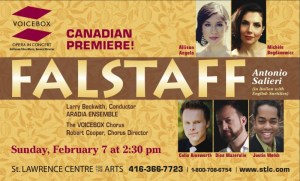 CONGRATULATIONS TO THE ARADIA ENSEMBLE FOR THEIR 2016 JUNO NOMINATION FOR CLASSICAL ALBUM!

Known mainly as Mozart’s rival, Salieri was one of the most popular opera composers of his day and FALSTAFF is recognized as possibly the very first opera based on a work by William Shakespeare. Salieri’s operas were internationally acclaimed during his lifetime and he was the renowned head of the Italian opera house in Vienna; later in his life, he taught Beethoven, Liszt and Schubert among others.

The all Canadian cast includes Dion Mazerolle as Sir John Falstaff—who has just been interviewed by our friends at Schmopera, Allison Angelo as Mistress Ford, Colin Ainsworth as Master Ford, Michèle Bogdanowicz as Mistress Slender and Justin Welsh as Master Slender, and new generation artists making their debut with OIC Sydney Baedke as Betty as well as Diego Catala Bardolfo who OIC patrons will remember from last season as the stern and commanding Frank Maurrant in Street Scene.